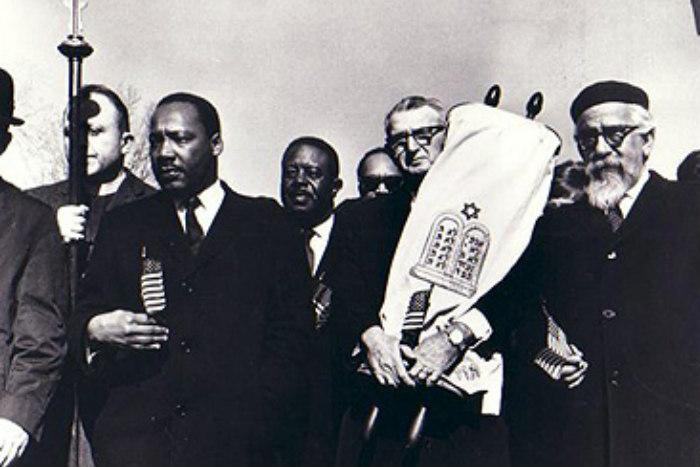 Judaism teaches respect for the fundamental rights of others as each person's duty to God. "What is hateful to you, do not do to your neighbor" (Babylonian Talmud, Shabbat 31a). Equality in the Jewish tradition is based on the concept that all of God's children are "created in the image of God" (Genesis 1:27). From that flows the biblical injunction, "You shall have one law for the stranger and the citizen alike: for I, Adonai, am your God" (Leviticus 24:22).

American Jews played a significant role in the founding and funding of some of the most important civil rights organizations, including the NAACP, the Leadership Conference on Civil and Human Rights, the Southern Christian Leadership Conference (SCLC) and the Student Nonviolent Coordinating Committee (SNCC).

In 1909, Henry Moscowitz joined W.E.B. DuBois and other civil rights leaders to found the NAACP. Kivie Kaplan, a vice-chairman of the Union of American Hebrew Congregations (now the Union for Reform Judaism), served as the national president of the NAACP from 1966 to 1975. Arnie Aronson worked with A. Philip Randolph and Roy Wilkins to found the Leadership Conference.

From 1910 to 1940, more than 2,000 primary and secondary schools and 20 Black colleges (including Howard, Dillard and Fisk universities) were established in whole or in part by contributions from Jewish philanthropist Julius Rosenwald. At the height of the so-called "Rosenwald schools," nearly 40 percent of Black people in the south were educated at one of these institutions.

During the Civil Rights Movement, Jewish activists represented a disproportionate number of white people involved in the struggle. Jews made up half of the young people who participated in the Mississippi Freedom Summer in 1964. Leaders of the Reform Movement were arrested with Rev. Dr. Martin Luther King, Jr. in St. Augustine, Florida, in 1964 after a challenge to racial segregation in public accommodations. Most famously, Rabbi Abraham Joshua Heschel marched arm-in-arm with Dr. King in his 1965 March on Selma.

The Civil Rights Act of 1964 and the Voting Rights Act of 1965 were drafted in the conference room of Religious Action Center of Reform Judaism, under the aegis of the Leadership Conference, which for decades was located in the RAC's building.

The Jewish community has continued its support of civil rights laws addressing persistent discrimination in voting, housing, and employment against not only women and people of Color but also in the LGBTQ+ community and the disabled community.